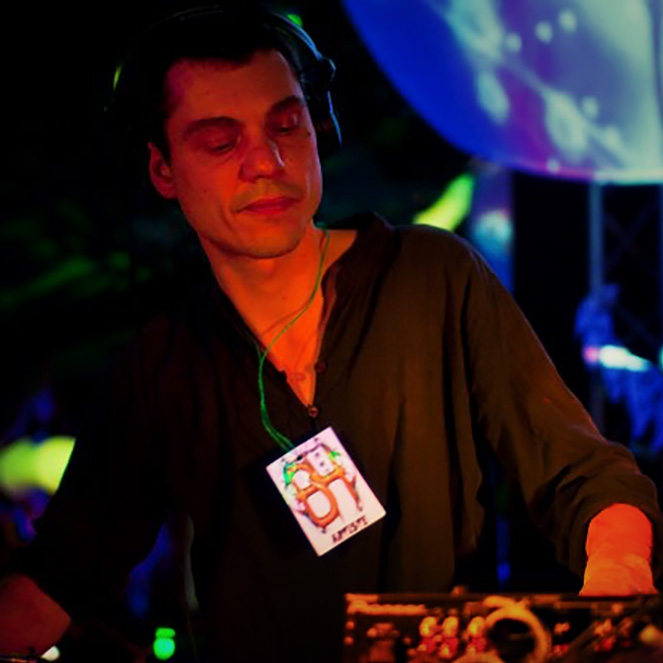 Musically, Dj Zorglüb has gradually shifted from full-on to progressive psytrance, in a very rhythmic and abstract style.

• Sylvain aka Zorglüb was born in France in 1973. In his teen age, he was influenced by classic rock/pop artists such as Hendrix, the Beatles, Pink Floyd, Bowie, the Stooges or the Velvet Underground.
• Then, back in 1992 – thanks to his big brother, parties collectives such as Techno Tanz Resistance or the Spiral Tribe, Dj’s such as Iguane, Laurent Hô, Yayo, Chaos, Lenny Dee or Liza N’Heliaz and a famous radio show, Rave Up, created by Patrick Rognant on radio FG – he discovers techno and trance music as well as the underground electronic music scene. The people, the music, the dance are such a revelation that he soon leaves out his guitar and buys his first turntables. He then starts to perform in raves and free parties where he plays hardcore, goa trance and full-on.
• In 1997 and 1998, he moves to Abidjan where he is the resident Dj of l’Enfer Club.
• Back to France, he works for SCV Audio and then for Radio France, where he currently is project manager at the audio facilities engineering department.
• With his group of friends, he organizes a few events in Paris under the name Bonux Party. Then, still with the same collective completed by his brother and his friends settled in Berlin, they organize the Mad Masters parties, combining visual arts and electronic music.
• Faithful to the vinyl for more than 20 years, he still uses a pair of Technics turntables to play and definitely loves them. Well… now using a Serato to keep them alive – and thanks to talented artists and exceptional labels (Iono, Iboga, TesseracT studio, Nano, Ovnimoon…) who produce bomb tracks weekly – he keeps on spinning records on his decks as well as dancing on Earth with the Happy Nation…